The region was once called Los Angeles Buttes, since they were the only ones in the northern part of the county. The film history of the region dates back to 1938. Numerous movies, serials, commercials and television series were filmed in Lake Los Angeles for decades. Filmed segments and stock footage of "Bonanza" episodes made at the region include "The Mission", "Gallagher's Sons", "Twilight Town", "Big Shadow on the Land", "The Deed and the Dilemma", "The Oath", "Second Chance" and "Meena." Lake Los Angeles has two filming locations named "Four Aces Movie Location" (located on the northwest corner of 145 Street East and Avenue Q) and "Club Ed" (located east of 150 Street East between Avenue N and Avenue K). Both locations and surrounding areas have been used for television series, featured films, music videos, and television commercials. 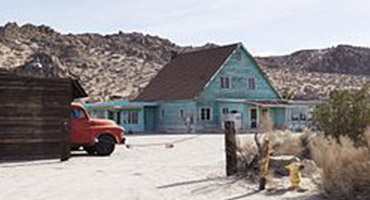 The eponymous lakes (one dedicated to fishing and one dedicated to swimming and boating) have dried up. The fishing lake was stocked with trout, bass and catfish. In 1967, during the 1960s land speculation boom in the Antelope Valley, land developers bought 4,000 acres (16 km2) in the region, subdivided it into 4,465 lots, and artificially refilled the natural lake and named it Lake Los Angeles as an enticement to land buyers. Advertisements showed a water skier on the lake (which was probably no more than 5 feet deep) and a showcase home on the top of the nearby hill, giving the impression of a resort town. There was a country club and a high-end restaurant that over looked the large recreational lake. There was also a small store/bar and grill. Streets were named Biglake Avenue, Lakespring Avenue and Longmeadow Avenue to draw attention away from the fact that the town was in fact a barren desert used for filming westerns. The lake was allowed to evaporate in the early 1980s after the initial developers sold their interests. Much of the land was sold to buyers who never visited the area. There are efforts to get the lake filled again, but the main obstacle has been funding.