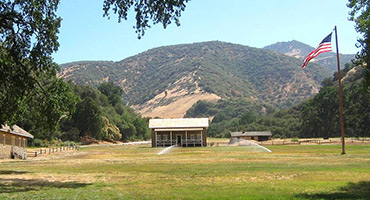 Fort Tejon is located in the Grapevine Canyon, the main route between California's great central valley and Southern California. The fort was established to protect and control the Indians who were living on the Sebastian Indian Reservation, and to protect both the Indians and white settlers from raids by the Paiutes, Chemeheui, Mojave, and other Indian groups of the desert regions to the south east. Fort Tejon was first garrisoned by the United States Army on August 10, 1854 and was abandoned ten years later on September 11, 1864.

There are restored adobes from the original fort and the park’s museum features exhibits on army life and local history. The park also has a number of beautiful 400 year-old valley oak trees.